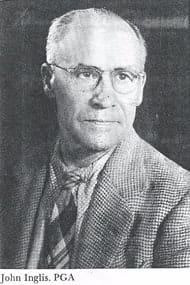 In 1912, a group of Aiken businessmen formed the Real Estate and Fidelity Company to develop a resort hotel for winter guests. The hotel was named The Highland Park Hotel after an older hotel was destroyed by fire in 1898. In 1912, several of the investors in the Hotel issued stock to build a golf course as an amenity to the hotel and a real estate development surrounding the course. The course opened with 11 holes in 1912 and in 1915 was completed. The principal developers were I.W. Fowler and E.J. Egerrton, who served as club president and treasurer.

The development of the hotel was inspired by Federal Highway Commissioner Richard Tufts whose father owned and operated the Pinehurst resort in North Carolina. The Tufts family had a vision to link their resort with Aiken by way of a new Highway (US 1). The relationship with the Tufts family was a key influence in the construction of the golf course.

John Inglis became a golf professional in 1915 and helped expand the course to 18 holes. As an early golf professional, Mr. Inglis had worked with the original designer of Shinnecock Hills. He also worked with Donald Ross in Elmsford, New York. This experience can be seen in his ability to complete the final 7 holes. As a founding member of the PGA and summer professional at Fairview CC in Elmsford, New York, Mr. Inglis had many famous students and friends. Often Mr. Inglis would get visits from U.S. Open Champion Chick Evans and the Turnesa brothers, whom he had taught as youngsters in Elmsford. May Dunn, the first female golf professional in the U.S. also visited and it was her recommendation that led to special tees for ladies, making Highland Park course the first in the country to have tees for ladies. Under the leadership of John Inglis, the golf course became a cultural center in Aiken during the roaring twenties.

The stock market crash of 1929 forever changed the history of the golf course at the Highland Park Hotel. The hotel struggled following the Great Depression until it was torn down in 1941. The golf course was able to survive due to the efforts of the city government. Joe Frasca, an assistant to Mr. Inglis in New York, took over the duties as head professional. The course was made public becoming The Aiken Golf Club and a new era had begun in the history of the golf course. Under the leadership of Mr.Frasca, many improvements were made in the course, including the stone steps at hole 16 and the stone work around the clubhouse. Most notable were the Women’s’ Invitational Tournaments that were held in 1937, 38 and 39. These tournaments brought the likes of Babe Zaharias, Patty Berg, Helen Detwiller and many other early pioneers in ladies professional golf to The Aiken Golf Club.

The Golf Course was purchased in 1939 by the city of Aiken and operated by the city until 1959. During these twenty years, golf professionals Mike Lucas and Orville White, carried on the tradition of teaching and promoting golf in Aiken. Mr. Lucas, the father of the Tri-States Open, originated the tournament in 1946 and was its host Professional until he went to Greenville Country Club in 1949. Robert W. Knowles, Jr. of Aiken was the first Champion of the event. The tournament was conducted for 16 years and brought players like Julios Boros, Johnny Palmer and P. J. Boatwright to compete.

Orville White, a former tour player and Masters contestant in 1935 and 1936, became the club’s Professional in 1951. Mr. White would remain the man to beat at The Aiken Golf Club until the city decided to sell the course in 1959. As Professional of the Club, he ran the Tri-States for nine years and gave many fine players their start in the game.

The city of Aiken decided to sell the course in 1959 due to the lack of funds to operate the club properly. The club was purchased by James McNair, Sr. and the name was changed to Highland Park CC. Mr. McNair, an experienced golf professional and renowned player, brought the course in step with the times. He added a pool and hosted many club functions that provided an environment where the family was welcome. Teaching many juniors to play and love the game made the course a place of refuge for many who were fortunate enough to share his knowledge. The legacy of the course and Mr. McNair can be seen in the number of successful professionals he trained at the facility. Mr. McNair retired in 1987 and handed the course over to his son, James McNair, Jr. Mr. McNair, Sr. still holds the historic course record of 58.

The next 18 years in the club’s history were marked with increasing difficulties. Jim would be faced with an increase in areas courses and a lack of irrigation. The layout was fine but the old infrastructure was not maintainable by market standards. It was time to rebuild the facility from the ground up and with the help of the city, Jim began construction in 1997. The course was completed in the fall of 1999. The name of the course has been changed to The Aiken Golf Club.

Jim McNair, Jr.’s vision for The Aiken Golf Club’s future is to provide a golfing experience for its members and guests that is reminiscent of a time when the game was appreciated for its Scottish Traditions. Jim Jr. has brought the “Ross” back to The Aiken Golf Club. In 2012, the Centennial Year, Jim was declared as a course designer, along with Ross and Inglis.